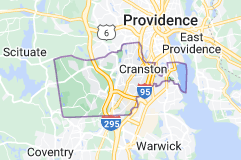 Cranston, once known as Pawtuxet, is a city in Providence County, Rhode Island, United States. The official population of the city is 80,559, making it the third largest in the state, however 2018 census estimates show the population has likely surpassed neighboring Warwick, making it the second largest in population.